Barnack is a village and civil parish in the City of Peterborough unitary authority of Cambridgeshire, England. It is located in the north-west of the district, only four miles south-east from Stamford in Lincolnshire. According to the 2001 census, it had a population of 851 people. Barnack’s councillor is the former Deputy Mayor, Dr David Over (Conservative).

Barnack is famous for three things: its limestone industry, its church and an unusual early Bronze Age burial.

The stone, sometimes called “Barnack rag”, was a valuable building stone first exploited by the Romans. Quarrying continued in Medieval times when the Abbeys at Peterborough, Crowland, Ramsey, Sawtry and Bury St. Edmunds all used Barnack stone, and the monasteries frequently argued over the rights to it. Blocks of stone were transported on sleds to the river Welland and loaded on to barges in which it travelled down the Nene and the fenland waterways. Most famously, stone from Barnack was used to build Peterborough and Ely Cathedrals. By the year AD 1500, all the useful stone had been removed, and the bare heaps of limestone rubble gradually became covered by the rich carpet of wild flowers, such as the pasque flower and pyramidal orchid, which can be seen today. This area, now a National Nature Reserve, is known as “The Hills and Hollows” or “The Hills and Holes”.

The church of St John the Baptist is noted in particular for its Anglo-Saxon tower. It also has a Romanesque sculpture of a seated Christ and possibly one of the earliest spires in England.

The Barnack burial was an important early Bronze Age find. The burial comes from a complicated monument which was expanded and altered on at least three different occasions. The original burial was very rich for the period, but was only covered by a small barrow. Over later times additional burials and cremations were cut into the barrow and it was enlarged twice. Probably at the same time three concentric ditches were dug around the barrow. The final monument contained at least 23 bodies and had a diameter of 50 metres.

When gravel quarrying threatened it in 1974, the decision was taken to excavate. The objects recovered were donated to the British Museum, however, replicas are on display at Peterborough Museum and Art Gallery

The primary burial was of a man aged between 35-45. He died sometime between 2330-2130BC. He was very robustly built and quite tall for the time, he would have stood at 1.78m. He was suffering from slight arthritis. Marks on his bones, and those of the other people in the barrow, show they were used to squatting down (though it is unknown if this is due to the type of daily work they did or just how they sat). His teeth had no disease, but were well worn, showing he had mainly a gritty diet of cereals.

The grave goods of the primary burial are unusual. There was a large ‘beaker’ pot. There was a copper dagger, again a common item to be found in graves of the time. There was a piece of oak charcoal. It is unknown what this was for and no one has been able to make a good guess. There was an unusual pendant made of either bone from a sperm whale or walrus ivory. However, the most unusual item was a stone wrist-guard. These Stone wrist-guards normally have between two and six holes carefully drilled into them. However, the wrist-guard from Barnack has eighteen holes, and each one is filled with a foil-thin disc of gold. The wrist-guard from Barnack was never meant to be worn since the gold caps in the holes would have stopped it from being tied to the arm. Less than a hundred such wrist-guards have been found in Britain and the example from Barnack is arguably the finest.

Charles Kingsley, writer of The Water Babies, spent his childhood at The Rectory (now called Kingsley House). His brother Henry Kingsley was born there in 1830. 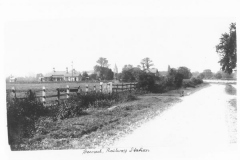